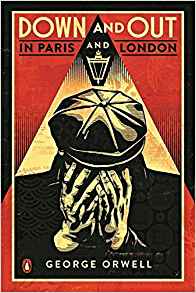 Near the beginning of Orwell’s book Down and Out in Paris and London, he describes the brutal rape of a young French woman, and his point is not anything about her being held captive in a basement in Paris, but only about the man who exulted in telling the story of raping her. He could do anything he wanted, the man said, and Orwell, that great humanist, doesn’t wonder at the notion that what he might want to do is exult in the humiliation and powerlessness of another. It was “an incomparable rapture,” the man says, describing his rape of a young woman –– a peasant, he thinks, possibly sold by her parents –– and her terror. But the woman is nothing but a backdrop. Orwell’s point is simply the eccentricity this man. A “curious specimen.” That’s all. I love Orwell and I won’t stop loving him for this, but I do wish I could send a message back in time telling him he’s got hold of the wrong story here. It’s the wrong story and now, especially now, after #MeToo, these stories will never again be simply a footnote, to be taken for granted, the background, these stories, as so many women have known all along, upend whatever else is happening.